This is how the SFC fuel cell works

SFC fuel cells charge batteries completely automatically. The integrated charge controller permanently monitors the charge status of the battery. When required, the SFC fuel cell is started automatically and turned off again when the battery has been charged. This means not only will the user always have full power reserves, but the user’s batteries will also last much longer because continuous charging prevents deep discharge. 230 V devices can also be operated via an inverter.

SFC fuel cells are based on DMFC (Direct Methanol Fuel Cell) technology. They generate power from the fuel in the fuel cartridge (methanol), complemented by oxygen from the air. Methanol is directly converted into power. In addition to power, all this creates is waste heat and water vapor with a little carbon dioxide. This is extraordinarily environmentally friendly.

The fuel offers significant advantages for mobile and portable applications because the liquid alcohol methanol can be transported safely and effortlessly in the practical SFC fuel cartridges in use.

To the SFC fuel cartridges 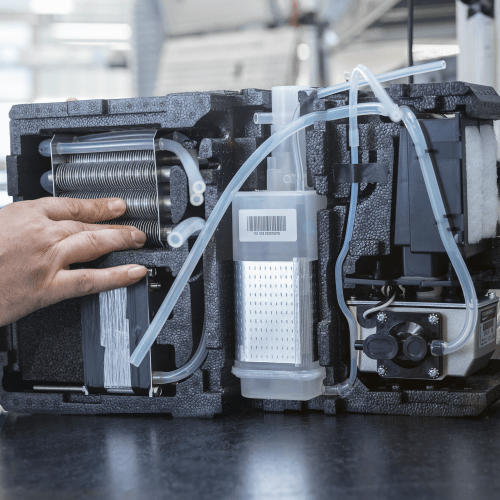 SFC fuel cells convert chemical energy into electrical energy without interim stages and without much loss of efficiency. That is why it is such an efficient power generator. The innovative and patented developments of the SFC fuel cells enable a miniaturized set-up, high performance, long service life, and low weight. Using the technology developed in-house, SFC has acquired a unique technological and competitive edge in the field of fuel cell systems for off-grid equipment with its fuel cells.

Of course, the SFC fuel cells also work with other power generators. In combination with solar modules, for example, they only turn on when the solar module cannot deliver sufficient power during bad weather or during the night. 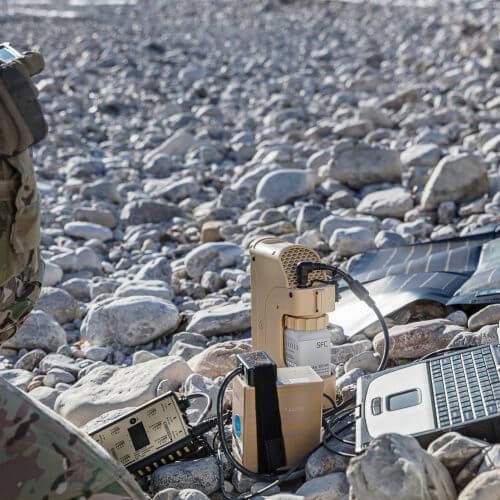 The principle of water recovery

The stack is the power-generating core of the SFC fuel cells. It consists of individual cells, each of which is set up to include an anode, a cathode, and a membrane. The membrane, as an electrolyte, separates the anode from the cathode. Positively charged, electric particles, so-called photons, can diffuse through the membrane. On the side of the anode, water and methanol are added, on the side of the cathode, oxygen is taken from the ambient air. In the reaction on the anode, H+ ions and free electrons are created, as well as the reaction product carbon dioxide (CO2). The protons can cross the membrane. The electrons, however, have to travel to the cathode side via a connected electric circuit during which they generate power. On the cathode, the H+ ions, the oxygen from the air, and the electrons are converted into water vapor. SFC fuel cells are therefore very environmentally friendly.

We are happy to help you personally!